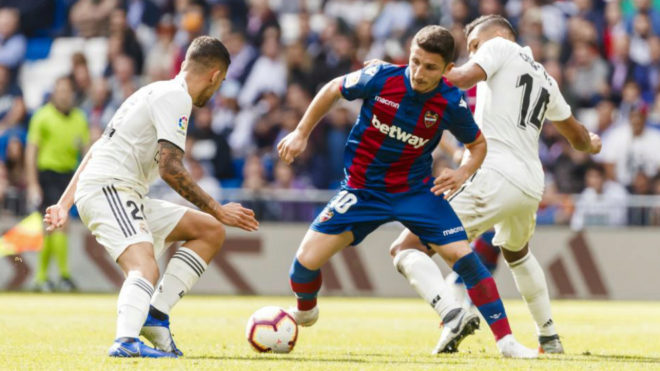 Real Madrid welcomes Levante at the Estadio Santiago Bernabeu on Saturday in a match from the
fourth round of La Liga. Let’s see what’s going on with these two teams during our La Liga
predictions for today. Let’s go.
Real Madrid won only one of their three matches in the league so far. Zinedine Zidane’s boys won
their first match against Celta in Vigo, but after this Los Blancos recorded two consecutive draws
against Real Valladolid and Villarreal. Because of this, right now Madrid are four points behind the
leader Atletico Madrid.
Real Madrid’s last game in the league was not an easy one. Los Blancos had to visit Villarreal at
the Estadio de la Ceramica. The game ended with a 2-2 draw. Both goals for Real Madrid were
scored by Gareth Bale, who was not wanted by the manager Zidane during the summer. In the last
seconds of the game Bale was also sent off with a second yellow card. He will not play against
Levante on Saturday.
The big news for Real Madrid is the fact that Eden Hazard is returning after a successful recovery
from an injury. Zinedine Zidane will finally have the opportunity to use his summer signing. James
Rodriguez is also ready to play again.
In the same time Levante are fourth in the current standings of La Liga with 6 points won. The club
from Valencia lost its first game for the season against Deportivo Alaves, but in the next two games
Levante won against Villarreal and Real Valladolid – two teams which Real Madrid didn’t win
against since the start of the season.
Two weeks ago Levante hosted Real Valladolid in Valencia and enjoyed a 2-0 win. Both goals for
the home side were scored in the last 7 minutes of the match. Sergio Leon opened the score for
Levante, while Morales doubled the hosts’ lead.
That’s our La Liga predictions for the game between Real Madrid and Levante on Saturday. Good
luck, pals.