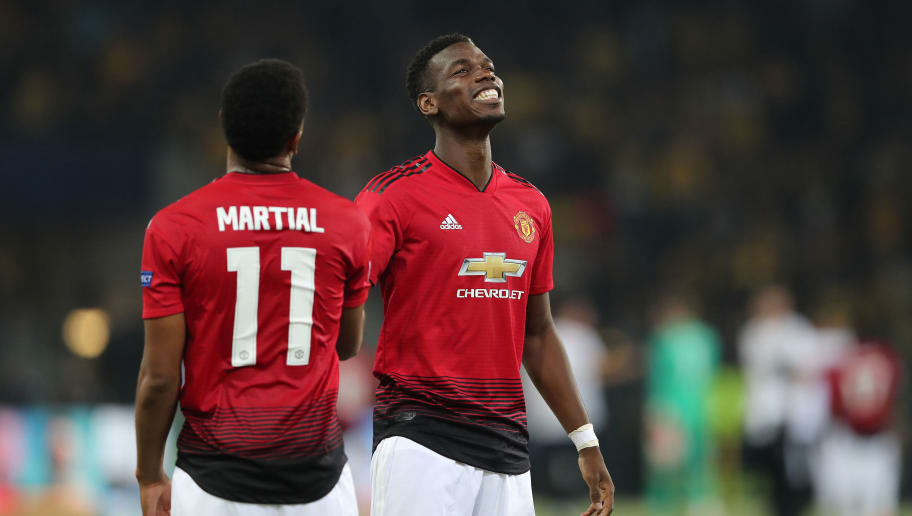 Can Jose Mourinho survive as a manager of Manchester United? This is the big question which
everyone asks right now. The Special One’s situation at the Old Trafford is getting more and more
complicated and his results in the Premier League are not helping him. On Tuesday night
Mourinho will have a chance to take a breath of fresh air when his side hosts Valencia in a match
from Group H of the UEFA Champions League. Allow us to present you our best soccer predictions
for the clash at the Old Trafford Stadium in Manchester.
Just as most of us expected, Manchester United won against Young Boys in Bern and kicked off
their Champions League campaign with a win. The Red Devils achieved a 3-0 win over the Swiss
champion, thanks to a brace from Paul Pogba and a goal from Anthony Martial. In this group there
are three major teams, who will fight for the first two places – Juventus, Manchester United and
Valencia. After winning against the underdog Young Boys, now United can make an important step
towards the 1/8-finals of the competition.
But how we said, it’s a tough time for Mourinho at the Old Trafford. The Portuguese manager is
starting to lose the trust of his own players. Everyone can see that there’s a big tension between
him and one of the team’s superstars Paul Pogba. Mourinho is not afraid to criticize his players in
the media and this is not helping him win their trust, too. And when a manager loses his dressing
room, you know what happens in most of the cases – the club starts looking for another coach.
During the weekend Manchester United suffered a dissapointing 1-3 loss against West Ham in the
Premier League, which worsened the atmosphere at the Old Trafford even more. Right now the
Red Devils are on 9 points behind the leader Manchester City, which is unacceptable for a club like
United. This was a second consecutive game without a win for the Red Devils, if you add up the
draw against Wolverhampton Wanderers as well.
During his press conference before the game against Valencia, Jose Mourinho once again
attacked his own players. The Special One said that “some players care more than others” – a
statement, which occuped the headlines. When a manager says something like this about his own
players, then we shall say the situation is really critical.
Manchester United really need to win this game. Things are not going well for the Red Devils in the
Premier League, but in the Champions League they could do much better. If they record a second
win, this time against Valencia, the English side will make an important step towards the next
phase of the competition.
But enough of United. Let’s talk about Valencia a little bit in our best soccer predictions for today.
Valencia returned to the Champions League after an excellent season in La Liga, inspired by the
work of their manager Marcelino. The club finished 4th in the Spanish league and returned to the
Champions League after a few years of absence. This was important for Los Che, who remain one
of the biggest clubs in Spain, despite of their inconsistency in the last decade.
But this season didn’t start very well for Valencia – neither in La Liga, neither in the Champions
League.
In the Champions League Valencia kicked off their campaign with a 0-2 loss against Juventus at
the Estadio Mestalla. Of course, there’s nothing shameful to lose against an excellent side like
Juve’s. But Valencia have enough reasons to be dissapointed, because they played with a man
more on the pitch after Cristiano Ronaldo’s red card in the first half. Despite of this, Juve’s Miralem
Pjanic scored two penalty kicks and the Old Lady took the win. Juventus are clearly a better team
than Valencia at the moment, but surely there’s a feeling that Los Che could have done more in
this game.
In La Liga Marcelino’s side also didn’t start very well the new season. In 7 matches played so far,
Valencia have won just once – against Real Sociedad in the previous round. The team have 5
draws and 1 loss in the other 6 matches.

It’s a little bit unexplainable why Los Che are having so many problems after such a brilliant last
season. Of course, it’s still an early phase of the campaign, so Marcelino has enough time on his
hands to find a solution to the team’s problems. But he must hurry up, if he wants his team to
chase a Top 4 finish in La Liga once again. As for the Champions League, Valencia really have to
avoid losing at the Old Trafford, especially after the defeat against Juventus two weeks ago.
What are the team news before the game?
Manchester United can’t use the injured Ashley Young, Ander Herrera, Marcos Rojo and Jesse
Lingard, who are not avaliable for selection because of injuries. Meanwhile there’s an interesting
situation regarding Alexis Sanchez, who can be benched again because of a poor form.
Valencia’s head coach Marcelino can’t pick the injured Santi Mina and Ferran Torres, but the left
back Jose Gaya is back in the squad after a successful recovery from an injury. Most likely Kevin
Gameiro and Michy Batshuayi will be partners in attack for Los Che.
These are our best soccer predictions for the Champions League game between Manchester
United and Valencia at the Old Trafford Stadium in Manchester. We already discussed what’s the
situation at United – there’s a manager under fire and nobody knows how long Jose Mourinho will
be able to keep his job. If United loses this one, God knows what could happen in the next few
days. As for Valencia, the Spanish side can’t allow to lose a second consecutive game in the
competition, if they want to progress. It’s never easy to play at the Old Trafford, but right now
Valencia have a good chance ot leave with a positive result.